Ok, so I’ve written a post here before on this same experience. It was full of all kinds of stuff only fit for my blogging audience. However, the first thing I wrote was for publication… except that – it didn’t get published. So, here is the original Jimmy Page Listening Event Article. Hope You Enjoy! 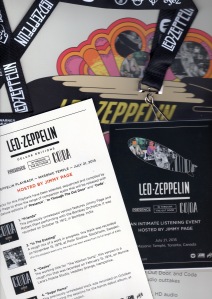 Under the eerie red lights of the Freemason “Red Room,” there are medieval style thrones lining the walls. In stark Twilight Zone-like contrast, the centre of the room is filled with those “hard on your ass” chairs you would expect in a public school library. There are chandeliers with incandescent bulbs where candles once burned hanging from the ceiling; velvet drapery on the stage hiding a screen for the video projector; middle ages-type mason symbols on the wall with camera men standing directly below them. It’s a bizarre spectacle populated by aging rockers, business types, contest winners and music journalists mingling in the surreal dance of ‘who can rub elbows with the rock god.’

Everyone has a lanyard around their neck, mimicking the illustrious backstage pass of teenage dreams past. Multiple conversations float in the air about instruments lying nearby in case Jimmy wants to jam. Some guys have brought guitars to be signed while others jockey for aisle seats in hopes of shaking the hand of Jimmy Page. 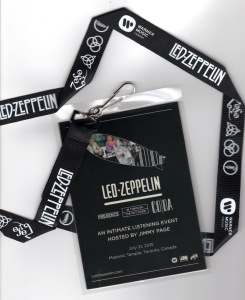 And who can blame them…

When Led Zeppelin last convened for the Ahmet Ertegun Tribute Concert back in 2007, 20 thousand tickets were sold, with 20 million more fans requesting tickets. On this night, there are 200 or so people in the room listening to a selection of songs handpicked by legendary guitarist/producer Jimmy Page, showcasing tunes from Presence, In Through The Out Door, and Coda.

Things quiet down quickly as Q107’s Jeff Woods welcomes the Zeppelin architect to the stage. A standing ovation greets Page who tells us we are about to depart on a “musical journey.” It’s at this moment that the surreal nature of the evening is lost and everyone remembers why they are really here – the music.

While there have been a few jaded critics claiming “cash grab” after multiple reissues of Zeppelin material over the decades (1990 Box Set, 1993 Complete Recordings, 2008 Definitive Collection and the 2014 -2015 Remasters), hearing the results of Page’s remaster and companion audio causes a fan to re-examine just how damn brilliant Led Zeppelin were back in the day.

Leaning heavily on the supplemental material from the deluxe edition of Coda, we hear alternate versions of “Friends”, “Desire”, “Poor Tom”, “Fool In The Rain”, “Bonzo’s Montreux” and “When The Levee Breaks” under it’s working title of “If It Keeps On Raining.” It’s staggering. Familiar tunes are given new life, and nuances previously missed are pulled out with sonic clarity. “Bonzo’s Montreux” is portrayed as a “mix construction in progress” but it sounds more like a drum symphony, with individual sounds given more clarity. The perceived steel drum sound that was a highlight can be clearly heard as a Page studio effect meant to emphasize John Bonham’s abilities.

Previously unreleased “Sugar Mama” is a playful example of the band’s 1968 musical prowess. Recorded during the Led Zeppelin I sessions, it was left off the album because it didn’t fit with the feel of their spectacular debut.

“If It Keeps On Raining (When the Levee Breaks)” is a whole different recording, with Robert Plant’s vocals taking on a ghostly tone over a new menacing rhythm that places emphasis on the song’s darker nature.

As the last notes of “If It Keeps On Raining” ring, the Woods and Page interview portion of the evening begins. At once Page’s personable storytelling grips the audience, with various anecdotes conveyed on the Led Zeppelin mythos.

Woods then pulls out the question that everyone wants answered – why did it end? We all know that Bonham died, but Woods goes further, using the example of the Who continuing after the death of Keith Moon.

Page replies with an explanation that continues to build on the legacy of Zeppelin as both a unique and influential band, suggesting a “synchronicity” “synergy” and a virtual “ESP” that existed between band members. That if you look back at concert bootlegs, you see that the band’s penchant for improvisation made it so that fans never got the same show twice. The result was a group of musicians who had fun and remained relevant for their entire duration. His voice begins to drift off a bit as he finishes “ten years of these concerts, all of the improvisations, that when you have lost one of the key members of it, you wouldn’t be able to continue.” Snapping back, he then jokes about training a new drummer on the many ways to play a single Led Zeppelin song.

A few minutes later and it is all finished. Page offers a smile to the crowd and then vanishes. On the same Masonic Temple floor Zeppelin played 45 years ago, an offering of hors d’oeuvres, beer and wine is served to attendees… there are shared reminisces about the evenings events and smiles all around. It might not be the epic “Rock ‘N’ Roll backstage pass party” of a bygone era”, but it is a good way to end the night.

The Led Zeppelin remasters of Presence, In Through The Out Door, and Coda hit store shelves on July 31st.

2 thoughts on “My First & Last Word on the Subject! or Original Jimmy Page Listening Event Article”