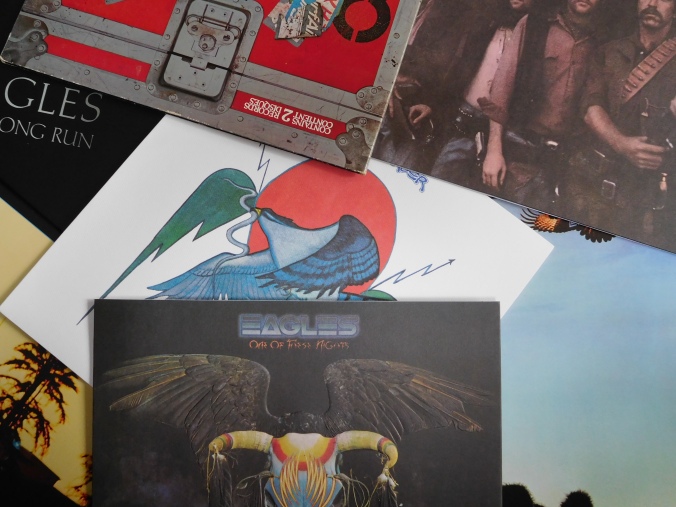 Identity and youth is such a strange thing. What one is willing to grasp on to in order to fill a void can seem like a whim but have implications that last a lifetime. For whatever reason, the music of the Eagles was what attached itself to me, and I in return, clung to them for more years than they themselves remained together in their initial run.

I remember hearing them from the crackling transistor AM radios that my older siblings owned and through the fuzz of the car stereo on the trips up north as a child. There was something that made them stick. I wasn’t even 10 when Hotel California was released, but it was the first album that I didn’t just want to buy, but somehow be a part of. More than the Beatles or the Stones, the Eagles were who I identified with. Of course, as a kid it was an oversimplified Scooby Doo type community I craved, but at that age you’re allowed to project those desires into your favourite tunes.

As I became a teen, my notebooks and textbooks would have the lyrics of their songs hand written into the covers. I knew that J.D. Souther was a frequent collaborator and that Jackson Browne had co-written “Take It Easy.” I was familiar with previous bands too; that Randy Meisner had once been in a band called Poco, that Bernie Leadon had been a member of the Flying Burrito Brothers, that Joe Walsh had opened for the Who as a part of The James Gang and mostly, that Glenn Frey and Don Henley were members of Linda Ronstadt and ultimately the masterminds behind my favourite band.

This wasn’t in the days of Google and Wikipedia. Every bit of information you got about the artists you loved was from careful study of an LP’s liner notes; gathered from magazine articles you were lucky enough to have picked up; or even books you searched for in the library… which was strange, because I only seemed to be there for this very reason. I learned about these artists from the radio itself. For years, I was tuning into Q107’s Six O’Clock Rock Report to get any little scrap of information about all my favourite bands. Before I even hit high school, I was a huge music fan with a doctorate in The Eagles. I could wax poetic about tons upon tons of rock bands; bore you with details about groups from the Beatles to Barnstorm, but the kings of the Southern California sound were my first love.

To that end, the passing of Glenn Frey hits home and hits hard. No, I never met him, and to be honest, his image as seen through History of The Eagles is that of someone who is wrapped in arrogance… but that doesn’t mean much to me. What mattered was that he helped provide a soundtrack to my life. His music gave me a reason to socialize and interact in a world that I felt desperately alone in during those early formative years. When I later lost interest in their music, it was still that initial connection that drove me to take a further interest in the sounds of other bands. Even as a music journalist, I would hear artists through a lens, that for better or worse was established with the same enthusiasm I had for The Eagles when I was child. As an adult now, I can both sing their praises and slam them in a single breath… but the truth is; every record from their debut to Eagles Live is sitting just a few inches from my turntable. In the basement, where an old stereo with a cassette deck is ready to resume work with a single button push, my old Eagles/Don Henley/Glenn Frey/Joe Walsh and James Gang cassettes wait to roll.

Earlier in the week, as I was discussing the death of David Bowie with an acquaintance, I said to him that “I’m hitting a crappy age.” It’s a time when the heroes, friends and mentors of our childhood start to disappear; a time when we seemingly attend more funerals than celebrations. Glenn Frey will live on through his family and his music… but platitudes seem rather empty at the moment. Today another part of my youth died, and no matter how much I wish for it, life will never sound the same. Still great sounding, but the volume is forever a little lower.

Recently I found these words that I had written in my cassette copy of Eagles Live. I purchased it as I waited for a train to take me to Portage La Prairie a very long time ago… (1985). It was the beginning of a journey that saw me through most of my 18th year – Katimavik.  It was a youth volunteer program that saw participants doing work throughout the country and even had a military option, which I was chosen for.

I walked up to the counter at the train station and in my best (which was horrible) French accent asked for a ticket to Portage La Prairie, a city that until only a couple days previous I had never even heard of. The guy behind the counter snickered at me as if I was from Mars – “You mean Portage?”

Me – “Could you tell me where the nearest record store is?”

Somehow I seem to just bring out the best in people.

Fortunately, the people outside were more helpful and I found my way to the record store. My copy got chewed in my Walkman during the flight from Toronto to Winnipeg, and not having it would be like a three year old having his Teddy confiscated… all, my security in the world just gone. This wouldn’t do.

While I didn’t realize it then, the Eagles in general and more specifically Eagles Live was like a lifeline to social well being. Nobody I knew hated the Eagles. Every teen and adult and… well, everybody liked them. During my “oh woes me” – “teenangsty” – depression filled adolescence, they gave me a social tool to talk about something other than my lack of a meaningful life. So damn, I began to know this band inside out. I owned the James Gang and Walsh solo material. I had seen Henley, Frey and Walsh on their own tours and knew who was backing them on the stage. I could tell you their past bands, who co-wrote what songs and their earlier influences… let’s face it – I was an Eagles geek. Sure you could find a lot of other music with me. I was a big music fan and could be found pontificating about the finer points of Van Halen, or Springsteen; maybe waxing poetic about Hendrix or the depth of the Beatles, but at this point in my life, the Eagles were my favorite band.

This cassette saw me move from November frost bite in Manitoba to a food poisoning Christmas in Quebec and finally rappelling of cliffs outside Victoria, British Columbia. It was my personal soundtrack to entertain myself as I got stuck doing ‘kit musters’. Yep, as a part of the Canadian Armed Forces – Naval Reserves, I found myself in minor trouble on a few occasions and ‘kit musters’ were the punishment. This involved your superior ripping apart your locker and bed and then you had to fix it and stand at attention while it was inspected and ripped apart again.

Much to everyone’s delight, I would put Eagles Live on the little tape deck, and go about my punishment with a smile, shutting it off only a few seconds before inspection. It was a little dance played out numerous times. The last few notes of “Life’s Been Good” would ring and I’d shut the deck off and a second or two later someone would arrive. They would leave, side two would start and by the time “Take It Easy” let out the last chords, it was time for another inspection.

Even at the end of the program, as I took a bus from Victoria to Toronto, it was the music of these guys that got me through. Walsh’s The Smoker You Drink The Player You Get and Barnstorm, Henley’s Building The Perfect Beast, The Souther Hillman Furay Band, Jackson Browne’s Running On Empty and the Eagles.

Like the three year old in need of the teddy, I eventually stopped my obsessive need to use the Eagles as a crutch as I found other music and artists. Actually, I found a whole lot more music and artists. The Eagles became more of a name amongst many in an ever growing music collection… but recently, I started looking back. So when I spotted used copy of Eagles Live on vinyl the other day, I couldn’t resist. An old familiar friend just leapt out my speakers and put me on memory lane… which is a pretty cool place to be for a few hours. Now if I could only get that picture disc vinyl edition of The Smoker You Drink, my life would be complete. (Yep – still a music geek) 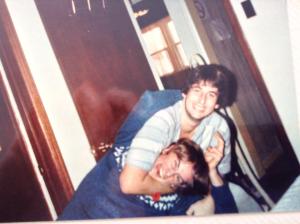