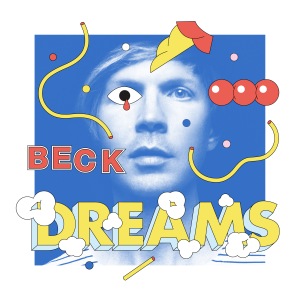 Could you make a lasting impression in mere minutes? The kind of connection that lasts a lifetime completed in clicks of a second-hand. That’s what a great song does.

Of course, the best tunes have you forget time even exists until the last moment, when you wish they could go on for much longer… if only to recapture the feeling you just had. Instead we can only replay it; in some desperate attempt to keep that response (whatever it was) going.

Coming off like a cross between The Cars, Dexy’s Midnight Runners, and Motion City Soundtrack “Show Me How To Move” is an infectious little gem about life’s insecurities. It’s catchy enough to stay in your head for weeks without wearing out its welcome.

A pure blast of rock ‘n’ roll delivered from just down the QEW in Hamilton. Terra Lightfoot put together a record full of gems with “Never Will” leading the charge.

The second single from If I Should Go Before You, “Lover Come Back” is an outstanding soul tinged tune harkening back to the days of Stax was the king of Memphis.

On first listen, “Moaning Lisa Smile” sounds like it may have been dropped into us from 1992, with its nineties alt rock vibe. However, it was just the start to what turned out to be a great record. Can’t wait for more!

“Firefly” was a 7” single released on record store day as part of the coolest release of the day. Buy the little green vinyl, and get a download card for 111 songs. How many bands can say they released 10 albums worth of material with a 45 RPM.

Conjuring sounds ranging from Van Morrison to Elvis Presley, “S.O.B” was the single that started the ball rolling on a great record and rave reviews from everywhere Rateliff went to play.

It’s only been around for a few weeks, but I’ll be damned if it isn’t a great song. Full of influences ranging from the UK to San Francisco, it rides a great groove from start to finish.

Talk about a salvo! Barnett’s “Pedestrain At Best” is like a personal mission statement to music. She puts out songs that carry the confessional style of Paul Westerberg (the Replacements), the humour of David Lowery (Cracker, Camper Van Beethoven) and energy of the frickin Pixies.

Somewhere between soul, disco and straight up rock ‘n’ roll, “Don’t Wanna Fight” is the kind of tune that hits emotionally and has you singing along. Even my kids try hitting those high notes as we cruise the streets in the minivan.

Speaking of my kids, “Dreams” was their favourite of the year, as well as mine. Like the most memorable of Beck’s work, it had elements of hip-hop built into the rhythm, a great ‘wonky’ guitar riff, and lyrics that captured the imagination even when they seemingly made sense only within the context of a dream. Only wish it was supported by a full album. 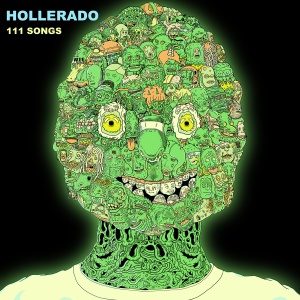 Fact is I missed the best damn thing released on Record Store Day. I saw it, but with so much stuff already in my hands I started counting my pennies and kept walking. However, curiosity got the better of me, and I streamed the single, and then realized what was really happening… this was “THE” thing to get. Sure Hollerado was releasing a single for “Firefly” in green glow in the dark vinyl that was epic looking, but the title 111 Songs wasn’t just a title – It was a statement of facts – there was actually a download card with the single for one hundred and eleven songs! How many bands give you over a hundred songs for the price of a vinyl single – no other band people… no other band ever! 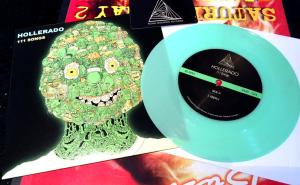 Hollerado is a power-pop outfit whose home base is ‘now’ Toronto (they formed in Ottawa) and have been putting out quality tunes since 2007. They’ve been runner ups for Junos (Canadian Music Award) on three occasions. Their last record White Paint is filled with some serious harmonies and presents a level of word play that is missing from most of the rock oriented bands that have recently presented themselves. They have spent the last few years touring with The Flaming Lips, Weezer, Passion Pit, The Dead Weather and a few others.

111 Songs is a gift for fans who pre-ordered their last record with one song written for each person and completed in less than two years. It is ultimately a huge workload all the more incredible as guitarist Nixon Boyd was battling testicular cancer (he’s fine now).

Anyway, I’ve been calling a few of my local record stores with no luck, but… it can still be ordered… YAY! While the band site, and record label do not have it, there is still a place.

So, if you like to rock out and toss your hair around to the sounds of something worth getting excited about – order this… (and as Stan Lee would say) Nuff said!