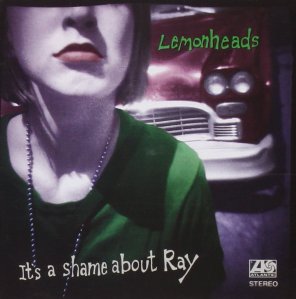 Back in May of ‘92 I was handed an advanced copy of the Lemonheads It’s A Shame About Ray. It was the very first album review that I did for the now defunct id Magazine, and it was a giant part of “my musical eye opening.” While Seattle had led the world towards what would be called “alternative” (whatever that means) this album slapped me in the face way harder than anything coming out of the so-called grunge scene.

It was twelve songs of pure ‘jangle pop’ joy that played like folk/punk/country/power-pop/lo-fi and whatever other style you decide applies all at the same time. You could play it at a party or a campfire. It had the energy of the Ramones with the pop sensibility of Big Star and the emotional depth of Gram Parsons. Under thirty minutes in length, Ray was a meaningful shot of music that did away with the heavy guitar bombast, and just gave you a perfect group of songs. What guitar solos that existed were of the “blink and you’ve missed it” kind. Hell, when I started playing guitar the following year, the first tune I learned was “Hannah & Gabi.”

To say that I was I was raving about this record would be a giant understatement. Every person that knew me was hearing about it and I was converting people into fans by the day. All this, and their cover of “Mrs. Robinson” wasn’t even on the record yet.

By the time they played Toronto’s Edgefest a couple summers later, it felt like I had personally invited half (ok – maybe a dozen) the audience. However, it isn’t the big show that comes to mind most when I think of the Lemonheads – it’s a much smaller venue that I attended in November of ’93.

The Masonic Temple, also known as the Concert Hall, was the sight of one of the coolest shows I had ever witnessed. The Line up was Magnapop, Redd Kross and the Lemonheads. As Magnapop began its set I noticed that the age of the audience was wickedly varied between aging hipsters who were into great shows and young hipsters who were now caught by the 90’s “alternative” bug. Looking back, this should have been just another of the frickin’ tons of shows I was attending… but no. Magnapop, who most of us had never heard of, began their set tossing candy out to the audience. The crowd was going insane with enthusiasm and applause. Then the brothers McDonald, who are essentially Redd Kross, jumped on stage treating a small venue ‘all ages show’ to a taste of ‘rock star swagger’ that would not have been out of place at Glastonbury. It was ‘hair rock’ for the alt-rock kids who were now “pogo-ing” in a mosh pit that was quickly expanding to all areas. By the time the Lemonheads hit the stage the November audience was dripping in summer sweat.

Then came the body surfing. Oh sure, this was the usual fare for concerts in ’93, but something was different. Usually, it is your friends or a couple very good concert goers who keep you safe from falling. Not this time. The kids – all of them – a community of fans were keeping each other aloft and preventing falls. Women, were body surfing and not getting groped by idiots/assholes in the pit – because… well, this concert was the coolest, safest, “best-est” (yeah I know it isn’t a word) ever! In fact, this is what concerts are supposed to be like! Evan Dando is on stage playing guitar and singing and I’m in awe of both the performer and the audience alike.

Honestly, I had been to a lot of concerts before that one, and a lot more since, but outside of a few local acts playing to their hometown crowds, this was the most appreciative audience I had ever been a part of.

Today the mail arrived with my copy of It’s A Shame About Ray on 180 gram vinyl. It isn’t just one of my all time favorite records, or a ‘must have’ for fans of 90’s music… nope… it’s a good friend I’m always happy to see.