A number of years ago I stood in front of a very large glass case. Wreckage from a plane and a name on the wall beside it was the sheer bullshit that the rock hall had displayed… as if this was some kind of legacy worthy of the talent that had been Otis Redding.

As I looked around this Cleveland cathedral there was no explanation as to who he was and why he was in the hall of fame. The man who had put the mighty Stax on his back and commanded that you listen; the soul king who had the greatest band, Booker T & the MG’s as his own personal musicians in the studio; this giant who was arguably the strongest voice to emerge out of soul music’s greatest era (that saw the height of careers such as Ray Charles, Aretha Franklin, Wilson Pickett and James Brown); was reduced to a ridiculous display without context.

Message to the Rock ‘n’ Roll Hall of Fame…

If you are going to reflect on the legacy of a music “god”, you don’t create a display – “YOU BUILD A MOTHER FUCKIN’ ALTAR! SHRINE! & PYRAMID!”

Keeping that in mind, how would you create a new record worthy of that legacy?

Somehow the people at Stax records have managed just that… well, sort of. 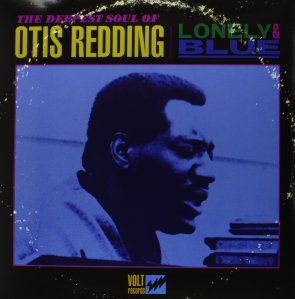 Obviously Lonely &Blue is a compilation of previously released material, but wow, it was done right. While being a new collection it looks like a record put out in 1966. This includes a back cover testimonial about the potency of Redding written by the fictional Marty Hackman at WDHG Detroit and overall cover artwork that has the appearance of  ‘record wear’ and stains.

The music itself is made up of Redding’s more ‘heart breaking’ material. Some of the songs are his more famous hits like “These Arms of Mine” and “I’ve Been Loving You Too Long (To Stop Now)”, but of far more interest (to me) was the inclusion of lesser known tracks like “Waste of Time” and “Everybody Makes A Mistake” which had not been included in the 1993 Definitive Box Set. While playing a rather sad tone throughout the entire record, it also displays the emotional depth that Redding seemed to tap with ease.

In addition to the great music, Lonely & Blue was put together with the turntable in mind. Once you open the vintage style package you find yourself looking at a beautiful piece of blue translucent vinyl.

This compilation isn’t just a great introduction into Otis Redding, but it also stands out as a wonderful exploration into his well mined theme of sorrow. So grab a glass of red wine, turn the lights low, and let a genuine soul Titan take you away to another time and place… that seems very familiar all the same.

One thought on “Remember that great classic record… that never happened – The Deepest Soul of Otis Redding: Lonely & Blue”