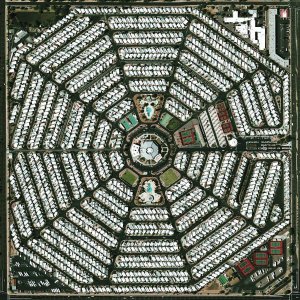 Let’s face it, Modest Mouse is never going to get any better and cooler than they were a few years ago when Johnny Marr joined up for an album and tour, and every album subsequently will be judged against the success of We Were Dead Before The Ship Even Sank. Sure early albums like The Moon & Antarctica were great records that built their reputation, but both the commercial and critical success of We Were Dead… makes it the career highlight.

Perhaps that’s why we see an 8 year wait between records, although, it really doesn’t seem like that long ago, but I digress…

Modest Mouse has always balanced themselves on a thread between ambitious and eccentric. At their best they have this quirky genius thing going on and the other side of the coin is this pretentious arty bullshit that isn’t nearly as smart as they seem to think it is.

So, which side of the line did the coin land on?

Thankfully, they landed face side up with Issac Brock finding that sweet spot between trippy stories and letting his top notch band find the grove to emotional resonance. Yes it is quirky and full of quick turns and humour, but it also has musical lift that keeps things moving.

Take their first single “Lampshades on Fire”, one could easily look at it as more of the same from Modest Mouse, a simple next step from their previous offerings. However, this first look at the new record is more like a statement that grounds the band. It pulls a funky grove and lyrical twist without things drifting off into a world of self-absorption. The rest of the record takes shape around that idea. Brock & co. Never allow things to get out of hand which I found to be a bit of a deterrent on earlier records.

Anyway, the vinyl advance order came with a 7” of “Lampshades on Fire” as well the 180 gram double vinyl of Strangers to Ourselves. It was worth the purchase price and should get plenty of time on the turntable over the next few months.

One thought on “OH MY GOSH… a review of something new! Modest Mouse – Strangers To Ourselves”