Something about the bass line in “Love Buzz” that at times seems both sinister and fun. Then the guitar kicks in and you can’t decide which instrument to ‘air-play’ to, and when you finally decide, you find yourself doing vocals and tearing your throat apart in a vain attempt to capture that fierce Cobain voice. I could listen to this over and over like a demented 13 year old and never see myself getting sick of it.

A long time ago, I saw Sugar play several times. I was always blown away by how Mould can convey image and emotion with a dry vocal competing against his fierce (and very loud) guitar work. He’s also the guy that convinced me to have a pair of ear plugs in my pocket at a concert… my ears were ringing for two days after I saw Sugar for the first time.

Well I couldn’t very well talk about the Lego Simpsons house without sneaking in this wonderful bit of Green Day noise.

Most people think of Streisand when they hear this song. Instead I get killed by the heartache and laughter of the late great Gilda Radner. I think she would like this version too.

5. “In The Heat Of The Moment” – Noel Gallagher’s High Flying Birds

Noel Gallagher is one of those artists I will purchase without even hearing a song. He just has that dependable rock’n’roll sound that gets me humming in whatever setting I’m in.

Glasgow band has fun with a jangling low-fi house party sound. Would love to see them live, but the Atlantic Ocean provides a small barrier between me and that little dream.

I must have listened to a 100 different versions before I picked this one. You would think I would get sick of it… but no – I just wondered where the hell the Ramones version went.

Like the song, but if I see a lampshade on fire, I’m reaching for a frickin’ extinguisher, not dancin’ around.

This is a preview – I will soon be writing about a special vinyl acquisition and I couldn’t wait to play something from it. Here’s a picture – I just hope it sounds as good as it looks.

Arriving with the new Modest Mouse, came this great record in a coke bottle clear colour. Sounds great, looks great, and is another of that limited stuff I buy every so often.

I’ve been a fan of Travis for years, but the weird thing is, I couldn’t tell you much about them other than the Brit-Pop connection and that I have always enjoyed them. It’s like they have been stuck on the mellow side of Radiohead’s The Bends, and continue to dwell and explore that place.

The band with a religious name that doesn’t follow any religion – but can write a pretty decent tune involving Lego… well ok… as usual my wit has escaped me.

Another Glasgow band said to be the “Next Big Thing” falls short. Still, like Teenage Fanclub before them, they write some great tunes. Only problem is finding their stuff. 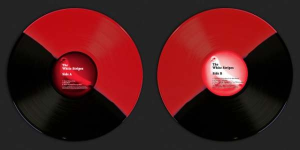 14. “The Hardest Button To Button” – The White Stripes

Seeing as I wrote about Elephant only yesterday, I figured they should hit the mix today. Besides it gave me another opportunity to include that Simpsons/White Stripes video.

Due to my fascination with vinyl I don’t often talk about new artists, but damn, this song was too good to pass by without putting it into the mix, ask me in a month if I feel the same way about the album.

I was always a bigger Faces fan than the Small Faces, but in recent years I’ve gone back to discover that when these guys were at the top of their game, they were every bit as good as the Kinks and Who… which is about the biggest compliment I can give.

It’s hard to believe that Alex Chilton has departed this place; even harder to believe he was only 16 when he recorded and had a #1 hit with this song. He certainly doesn’t sound like a kid.

Because I was in the mood for Chilton, I could help but throw this on right after the Box Tops. It is an awesome song in its own right. The album can still be purchased from Omnivore. For a good laugh, you can see how much Chilton hated lip-synching.

A prize find at last year’s RSD, I’ve spent many hours since mellowing by the window reading books and listening to this record.

One of my favourite songs from childhood, it convinced me I really didn’t want to grow up. Unfortunately, responsibilities have a way of making such proclamations sound rather silly. Still, I would rather be at “Echo Beach” on a mid August evening than in front of a computer in March. It was a long winter.