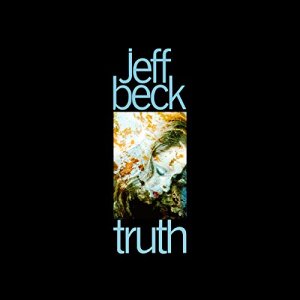 Back in the day, when young stoners would start discussions about the finer points of Led Zeppelin, someone would always stop the conversation with a single word – Truth. A small hush would hit the room as someone would explain that Rod Stewart was once cool… maybe twice ha ha… then tell the huddled few about the Jeff Beck Group. Discussion goes toward how Page ripped Beck off by showing him “this proto-type for Zeppelin” even going so far as to perform the same cover of “You Shook Me” on their debut. (Same Howlin’ Wolf song, but way different interpretations.) By this point I would drift away from all the “conjecture bullshit”, and find a good speaker to sit close to as the buzz wore off.

I have never been one for conspiracy theories, and all the talk about Beck vs. Page has always kinda bored the crap out of me. If there is any talking to be done, it should be by the music itself. So here it is – Truth, the first Jeff Beck Group record, has been re-released on mono – exactly as it was recorded, and exactly how it should be heard.

I’ve had friends ask me about mono vs. stereo and all I ever say is this; what format was the album recorded for? In the late 60’s the switch was taking place, and it started with a bunch of mono records being transferred to stereo after the fact. That is a good portion of the reason that the Beatles have re-released sets in stereo and mono and each had to be re-mastered for the individual format.

Mono means that all music is being put out through a single channel. You could have multiple speakers but the same identical sound, with equal distribution, will come out. In stereo, music is going out multiple channels allowing different sounds to come from multiple speakers. Hence, you might hear a vocal out of the right side and a guitar out of the left.

Anyway, both are cool, and both have an impact on how you hear the music. My personal gauge is how the music was originally released.

For the longest time Truth has only been available in the stereo format, but this newest import has been re-mastered from the source tapes back to its original mono origins. Whew.

With all the Zeppelin re-issues going out, I thought that someone should mention that this classic record, which to me plays as almost a companion piece to Zep I and vice versa, is out there to be had.

But act quick! Amazon in Canada is nearly sold out. Northern Volume still has a copy or two, but it could get difficult to find in a hurry.

One thought on “Just In Case You Forgot! The Jeff Beck Group – Truth (Mono)”