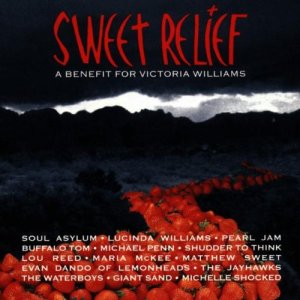 Back in ’93 I was given an album to review that became a best friend of sorts. Surprisingly it was a compilation record (which usually just don’t stand up due to inconsistency) of songs by an artist whose music was only known previously to musicians and music geeks, but it knocked me over. One song after another caught my imagination with vivid imagery and music that could be both morose and uplifting within the same moment. It was brilliant, which is something you usually can’t say for a record recorded by “various artists.” However, what holds it together is the artist to who the album was benefiting – Victoria Williams.

“My sister got bit by a copperhead snake in the woods behind the house” is the first line that pops out the old speakers as Soul Asylum breaks into “Summer Of Drugs” and I as listener was hooked. By the time Evan Dando (of the Lemonheads) sings “Frying Pan” I’ve decided I want to play guitar.  By the conclusion I’m looking for a bullhorn so I can tell any and everyone within earshot that they have to listen and buy this record. Williams’ songs are so detailed in character that songs feel like you’ve both read an exceptional short story and listened to a new musical experience. Despite the different styles of the various artists performing the songs, the original vision of the songwriter herself remains potent and shines through any genre leaping in the album itself.

If you don’t know the story, Williams star was on the rise when she was diagnosed with Multiple Sclerosis. Having been bogged down with debt from increasing medical bills a virtual who’s who of 90’s alt rock and beyond joined forces to help her and others out. The Sweet Relief Charity Fund was set up to help musicians in need of expensive health care.

More than 20 years have gone by and Pearl Jam is still playing their contribution “Crazy Mary” live, and my CD still has a home within twelve inches of the stereo. So, you can see my love for this record runs deep, and I want a vinyl copy… I just didn’t think that one actually existed. That is until the other day when I just started putting album titles into the discogs search engine and… oh my, it exists. But damn… only in European used stores that would raise the price with shipping to over a hundred bucks.

So, I hope that it gets re-issued on vinyl eventually or that the ghost of Ed McMahon shows up at my door with an oversized check.

Sweet Relief can still be purchased at your better record stores on CD and has two follow up LP’s.

Sweet Relief II: Gravity Of The Situation – The Songs Of Vic Chesnutt 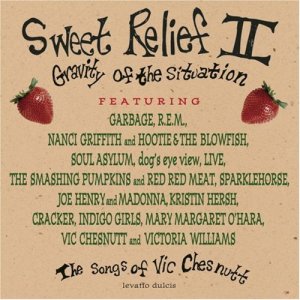 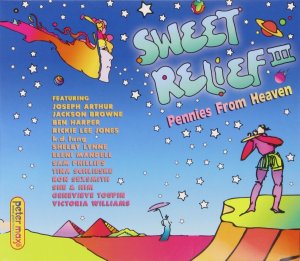 Check them out, give ‘em a listen, and maybe you’ll want to drop a few dollars to a worthy cause.

One thought on “I Really Want This! Sweet Relief: A Benefit For Victoria Williams – Various Artists”