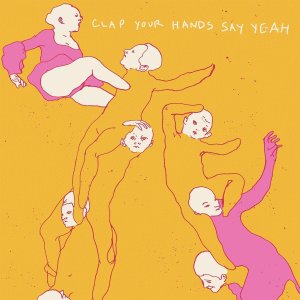 I have no idea what it was like in your house growing up, but in mine being ‘late to the table’ was a sure way to lose out on after dinner goodies. However, this whole ‘vinyl revival’ thing makes it so you can be years late to the table and still enjoy a great dessert.

Such is the case with the fabulous self-titled debut by Clap Your Hands Say Yeah. It has been 10 years since their initial offering and in celebration the band is re-issuing their out of print eponymous record with an additional recording of songwriter Alec Ounsworth doing a solo acoustic live show.

Just in case you may have forgotten Clap Your Hands Say Yeah popped onto the scene in spectacular fashion garnering rave reviews on both sides of the ocean and beyond. Names like Modest Mouse, Neutral Milk Hotel, Ride, and the Talking Heads have been used to describe them (Ounsworth’s voice does resemble a higher pitched David Byrne) but really they are a really well balanced stew of many influences. You can hear various styles dating from the 80’s to the present, which just means it is pretty hard to them pin down from one song to the next. Listen to it with friends sharing a couple bottles of wine and you could have an interesting conversation about what you hear and how good it is.

Out on June 2nd, the wax re-issue will be pressed on gold translucent vinyl and both the CD and LP versions will include download cards of the original release and live material.