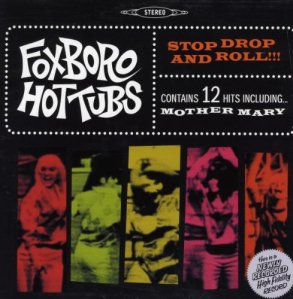 Green Day has had a few career highlights in terms of records, but one of my personal favorites is an album they didn’t even credit to themselves. The debut of Foxboro Hot Tubs was a splash of early rock ‘n’ roll that crossed the Sonics with the Kinks and just never let up. Gone were the political messages of American Idiot, and back came the sarcasm and pointed lyrical shots that made you a fan back when Dookie came out. From “The Pedestrian” Reverend Strychnine Twitch (Armstrong) sings “it doesn’t take a genius to be an idiot” and while bordering on a playful cliché, it still cuts to the desire for sound bites meant for fun.

Having played the CD recently I made the decision that I wanted a vinyl version to spin and had a need to find out what is available.

There has been and still remains only one option.

Released in 2008, Stop Drop and Roll!!! has a single vinyl printing that also contained a CD version of the record. However, it should be noted that the album was recorded on an old fashioned analog 8 track, making vinyl the perfect medium to hear it.

Don’t go to resellers for the album either as it is still widely available through your local record retailers.

I really hope they do another of these, it really is a great summer blast of fun!