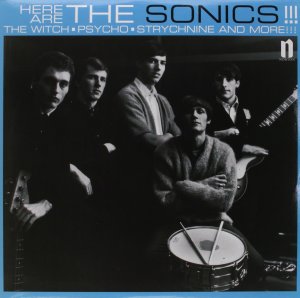 No one quite did early garage rock like The Sonics. They were a musical mess of fuzzy guitar, earth pounding drums, screaming vocals and lyrics that were dirty and just plain asinine at times. This was the early sixties and while The Beatles were singing “Love Me Do” The Sonics were belting out “she’s gonna make you itch / ‘cause she’s the witch” (from the song “The Witch”) and as the Stones sang about “Mother’s Little Helper” these guys were blasting out a tune named “Strychnine.” It was a sound that reverberated from the 60’s and had enough impact to influence everyone one from The Stooges to Nirvana. The fact is that they were punk long before anyone even coined the phrase.

That The Sonics are not a household name is more at testament to poor timing than quality of expression. They were loud and crass before it became popular, and when they tried to move in a more commercial direction, that sound changed again and the band wasn’t thrilled about their new path anyway. Their debut, Here Are The Sonics!!!, was released in 1965 and by ’68 they called it a day. However, punk in the 70’s and grunge in the 90’s brought renewed interest in the band. Nirvana and later the White Stripes and Hives hailed them as influences while cover versions of their songs were played by the Flaming Lips, The Fall, L7, The Cramps, LCD Soundsystem and more.

If you are considering giving these guys a try the best place to start is with Here Are The Sonics!!! which provides the best overall example of their sound. On vinyl, you have a few choices, but your best bet is actually the 1998 mono edition released on regular vinyl. Mono being how it was originally recorded, it sounds far better. The great thing is that it is still widely available, NEW, for around the twenty dollar mark. A re-united Sonics has been touring and recently released a new album, This Is The Sonics.