The last time I bought a cassette, well… I’m not sure I remember. It was definitely in the late 80’s or maybe 1990, but it’s all rather fuzzy. To some extent vinyl had always kept a small touch of cool, but cassettes were popular only because they were portable. When CD’s took over that market, they became obsolete. Still, there is that touch of nostalgia and I fully admit to having a tape deck hooked into the stereo as I was making ‘mixed tapes’ into the late 1990’s.

So imagine my surprise when the latest Metric release came in two formats only: digital download and limited cassette. (Actually, I’ll be honest, I find it pretty awesome!) Over to the old AIWA deck I go and watch two wheels turn a thin strip of plastic. There it is, that new single (“The Shade”), introduced to The Edge just a day or two before their Sugar Beach performance, starts pumping out the speakers. The green and red lights are bouncing a storm on the cassette players level reader. It’s all so… mesmerizing. Fortunately, so is the music.

Heavy on the synthesizer, The Shade takes the exploration of those sounds found on Metric’s 2012 release Synthetica an extra step away from 80’s synth-pop and 90’s alternative  only to mix it up with a slight industrial tinge. The result is a band that has managed to show growth and range with every new release and an ep that is catchy without being crass.

The title track with its repeated chorus “I want it all” speaks to living in the moment. “Cascades” finds tenderness in electronica, “Too Bad, So Sad” comes off as a post apocalyptic self-help manual, and the final cut “Office Towers Escalate” builds a heavy drum &keyboard jam into a Matrix like dance revue. 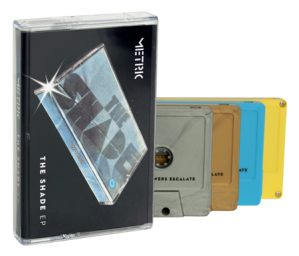 As if the music wasn’t incentive enough, Metric adds to the ‘collectibility’ of the cassette by signing autographs on the inside of the cover. Not that I think ‘the cassette’ is coming back in style, but I wonder if I need to get a head cleaner?

You can find The Shade ep at ilovemetric.com

One thought on “Would You Believe I Just Bought A Cassette! Or Metric – The Shade EP”