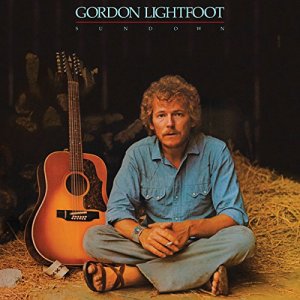 Rotating between having her head out the window or on my lap in intervals of less than ten seconds, Mugs would bounce around the inside of the Jeep like a canine pinball. The A.M. radio would play those adult contemporary hits which blurred the line between folk – rock – country and polite crooning intended to placate the masses who found The Sonny and Cher Comedy Hour funny. Between being stepped on, loved and driven to distraction by the sounds of Hot Butter’s “Pop Corn” that my friends was seven year old me in my dad’s AMC Jeep in the summer of ’74.

It wasn’t all bad, slipped in between the greatest hits of Neil Sedaka and Anne Murray came Gordon Lightfoot’s “Sundow,” a subversive little number promising murder “if I find you been creeping ‘round my backstairs.” I had no idea what that meant, but it sure sounded bad. That song and the follow up single “Carefree Highway” helped propel Sundown into #1 in both Canada and the U.S. in June of 1974.

Of course, vinyl was still king back then and plenty of records were issued in the year of its original release, but… what since?

Surprisingly, for a hit record, Sundown hasn’t seen much in reissues and remasters with two notable exceptions. In 1979, Mobile Fidelity gave Sundown the all-star half-speed recording treatment. You can find used copies for around $20. (Saw a still packaged one selling for over $200.00 on E-Bay, but let’s not get insane just yet). Then just last year a remastered 180 gram edition showed up for Record Store Day and you can still find them easily for about $40. Sound on it is outstanding.

If you’re crate digging you can still find decent copies of the original kickin’ about for under $5.

So, the vinyl spins I think of my Dad, my dog, and drives to the cottage along a carefree highway. Wish I knew where the hell that is! “When do we get there?”

2 thoughts on “When do we get there Dad? Or Gordon Lightfoot – Sundown”