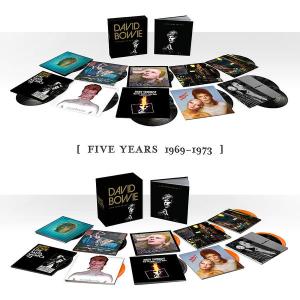 Just a couple days since I wrote a piece on David Bowie’s Pin Ups and bang! The Big Announcement!

Bowie is releasing a giant box set entitled Five Years 1969 – 1973. The first in a series of new sets, this one will be a 10 albums featuring his first 6 studio records, 2 live albums, plus The Rise and Fall of Ziggy Stardust and The Spiders From Mars 2003 Ken Scott Mix. In addition there will be a companion book featuring memorabilia, rare photos, hand written lyrics, press reviews and essays from the original album producers. It will all be available on CD and 180 gram audiophile vinyl.

Just to spell it out, you get:

David Bowie (aka Space Oddity), The Man Who Sold The World, Hunky Dory, The Rise and Fall of Ziggy Stardust and The Spiders From Mars, Aladdin Sane, Pin Ups, Live Santa Monica ’72, and Ziggy Stardust: The Motion Picture Soundtrack.

It will be released on September 28.

Not that I know anything about these things, but if he follows Springsteen’s example, but you can expect the newly remastered Space Oddity, The Man Who Sold The World, Hunky Dory and Pin Ups to get individual releases on Black Friday/Record Store Day. Either way, start saving now folks!