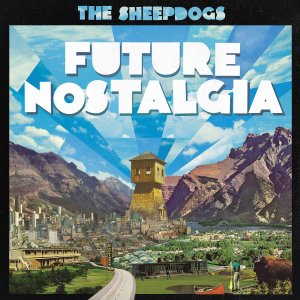 As the album title suggests, The Sheepdogs are a band lost in time. With absolutely no pretense to suggest anything else, they are what they are, and you can accept it or move along. The choice is yours.

So here is Future Nostalgia, an album that sounds like it was recorded at Muscle Shoals during the studios glory days. Opening track “I’m Gonna Be Myself” is instant proof as you get the Skynyrd riffs and Boz Scaggs vocal styles that were so recognized from the legendary southern studio.

Of course, if you are going to play with the sounds of the classic rock era, you might as well be as expansive as possible. “Downtown” throws in some Eagles harmonies and references them again on “Bad Lieutenant.” The swampy Bernie Leadon like guitar lead is reminiscent of the 1972 classic “Witchy Woman.” From there you get another Eagles guitarist, Joe Walsh, being reflected in The Sheepdogs “Take A Trip.” If you add the easy listening, Michael McDonald era Doobie Brothers sound, coming off “Jim Gordon”, and add in riffs that could come from rock stalwarts like Spirit, Free, Rick Derringer, James Gang and even Canada’s own Lighthouse, you have a pretty insane package.

The thing about the Sheepdogs is they’re not so much influenced by “classic rock” as actually sounding as if they stepped off a time machine from the era direct. If most any other band on the planet tried this, I’d be tossing out tired accusations of being poseurs. However, the songs are just too damn catchy for me to get a hate on for them. Yes you could slip them into a 70’s rock mix and someone could confuse it as a deep cut from an unknown, yet awesome, band from back in the day; but rock ‘n’ roll is nothing if not one giant recycling project.

So, how does that saying go? “Everything old is new again!” It’s kinda hard to argue with that when Future Nostalgia is spinning.