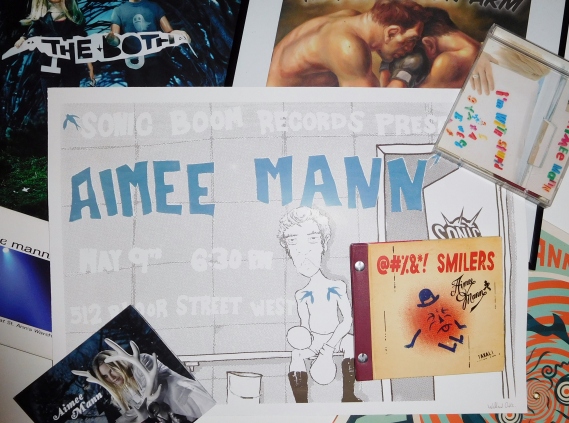 Back in university there was only one major thing I was envious about regarding my roommate/friend – his first concert. The first band he ever saw live was the Ramones; only the ‘coolest’ band to have ever graced the planet earth. Oh, you can mention ‘better’ or ‘more popular’ bands like Led Zeppelin, the Beatles, the Smiths, the Cure, etc and so forth… but unless you can tell me you saw James Brown live at the Apollo, or the B 52’s in an Athens dive as your first show, he had you beat.

Of course, his first concert outshone mine easily. I’m embarrassed to say, but that first for me was in the freezing cold at Nathan Phillips Square featuring Platinum Blonde. Sure, there are many bands that could rank worse as a first show, and it wasn’t a bad night either, but “It Doesn’t Really Matter” isn’t exactly “Rock ‘n’ Roll High School.” A few years later, with one four year old at my feet, and another child on the way, I vowed to make sure that my kids would get a cool first concert; something ‘worthy’ of telling college roommates about in a childish game of ‘mine is better than yours.’

So it was that in 2008, a couple things had lined themselves up. Local record store Sonic Boom (Scott Pilgrim vs. the World filmed a couple scenes in there) had acoustic concerts every so often in the basement of their Bloor Street location. I attended a Nada Surf show with the ‘former roomy’ and when it finished I saw the bands singer/songwriter Matthew Caws hanging out with some kids. Not ‘kids’ as in a middle-aged definition of people of the teenaged variety… but honest to goodness children. Not being the most perceptive of individuals, it only dawned on me right then, that… well, um, a record store is a safe and… dare I add, perhaps even ‘cool’ place to see a concert.

Five months after watching Nada Surf, and barely 8 weeks after my second child was born a quick e-mail announced that Aimee Mann was going to be playing a set at Sonic Boom. Since the early 90’s I had become a pretty big fan of Mann’s music. She had put together a consistent string of outstanding records that caught a great balance between power-pop (Big Star), new-wave (Elvis Costello, Nick Lowe), and the alt-rock scene of the times. Bachelor #2 was a staple in my house as the new millennium began and 2005’s concept album The Forgotten Arm seemed to be just more proof that she should be a household name. In other words, Mann had become an essential part of my life’s soundtrack. Alas, critical praise doesn’t always result in record sales. Of course, and from a purely selfish perspective, it also meant that seeing a ‘bucket list’ artist in a strange different style venue was about to happen.

So it was that during the early evening May 9th, 08 my wife and I took the boys out to see Aimee Mann. Needless to say, the youngest was in a car seat hanging out with my wife just in case he expressed any discomfort with the noise level. However, my 4 year old and I were sitting cross-legged in front of the small riser where he began to ask me a thousand questions about the small soundboard and the instruments on stage. He had a poster clutched in his hands and was smiling from ear to ear. Since his birth he had seen me playing guitar and singing songs and was now completely enthralled by the prospect of seeing a real music artist. Mann didn’t disappoint. Playing a few selections from @#%&*! Smilers, which was due for release a couple weeks later, she had everyone in a great mood. By the end of the set my son was convinced that Mann was the world’s greatest songwriter, and that she was smiling at him between songs. (I didn’t have the heart to tell him she was looking at where she was placing the capo on her guitar… and that the neck of the instrument was pointed in his direction.)

After the set, we waited around for about 30 minutes to see if we could get the poster signed. I’m not usually one for signatures, but I figured a momentous occasion like a first concert would be a great opportunity for my kids to have a keepsake. So we looked at the vinyl and cassettes which shared the basement with the stage, and kept an eye on the door for her exit. Unfortunately, whoever was interviewing her after the show was getting a really good chat, because she just never came out of the backroom in time for my son to get it signed. The baby needed to get home, and so we jumped into the rusty old minivan with a poster, our memories and a great first concert story.

Eighteen months later, my first born would get his second concert poster signed by a confused looking J. Mascis and a very gracious Lou Barlow after a Dinosaur Jr. acoustic set at Sonic Boom. (I mean come on, how many times do alt-rock legends get five year-olds walking up for an autograph.) Since then we’ve been to a bunch of small sets or shows. Both my boys (now just about to turn 12 and 8) enjoy going to shows at Sugar Beach where they can play in the sand before a band breaks into song.

Over the years, I’ve seen Mann perform a couple times, each time more impressive than the last and yet she still remains on my bucket list for a couple reasons. One, I’d eventually like to get to one of her annual Christmas shows. But, even more importantly, I’d like to have the kids go to a full concert that they’ll actually remember without daddy reminding them of when playing music on the stereo. When she last came to Toronto with The Both we were away on holidays and missed the chance. All joking about bragging rights aside, taking my kids to a concert isn’t about bravado, it is about bonding. Doing those things that allow memories to grow and be sustained.

So my old roommate has the Ramones… and that is pretty cool. But, on some future day when they’re at college and a friend asks “what was your first show?” both my children will be able to give a sly grin and reply – “Aimee Mann… and I wasn’t even in kindergarten yet.” The older one can even add “and, it’s on youtube. You can see my dad and I on the floor waiting for the music to start.”

Thanks for the memory Aimee

6 thoughts on “Aimee Mann: She isn’t the Ramones… but she is pretty damn cool! (A first concert story)”