Announced a few months ago, I had assumed early on that this “anniversary edition” of (the already classic) Illinois, would be like a few other artists – limited, advance order only and expensive. Music accolades aside, of which Illinois has received ‘many’, this is a first class vinyl reissue at a price that is downright inexpensive for what is included.

First, the cover features a new licensed picture of Marvel’s “Blue Marvel” replacing Superman on the original. While Superman is a household name, Blue Marvel is a relatively new comic hero that is just far ‘cooler’ than the DC man of steel. (Besides, licensing was an issue,)

Next you get a double two coloured 12” records in white and ‘Blue Marvel’ (blue with white splatter) and a star shaped red coloured vinyl single of “Chicago” in a tri-fold album sleeve.

Finally, it is all at a price under $25.00 Canadian, and can be purchased at your local retailer.

When was first announced I missed the boat and thought I was out of luck. However, this edition is actually limited to ‘ten thousand copies.’ That is a good thing folks! The original pressing with the ‘Superman cover’ was limited to 5000. Interestingly, the Superman image had to be covered up by balloons because of copyright issues. When you see it now, it is because people peeled off the stickers to get at the actual cover. The thing sells – used – for over $150 on the reseller market.

Back in 2013, Newbury Comics released a double vinyl set in red and green wax. On that edition, the balloons were a legitimate image on the cover with Superman removed. Limited to 1000 copies, this reissue of Illinois is selling for over $130 and sold out quickly; which leads me to why I am so very happy with Asthmatic Kitty for this release. 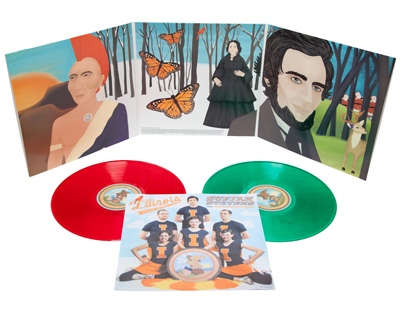 By printing 10000 copies, legitimate fans that missed out the first time can get an awesome package without breaking the bank. Call it a dream, but I wish more artists would go this route. Changing up the cover a bit and the colour of vinyl on the reissue, it gives old fans the collectability they desire and new fans a chance to get in and still have something unique. In a world where artists are losing money to streaming music, enticing consumers with an awesome tactile experience seems to be a great way to revive the physical market.