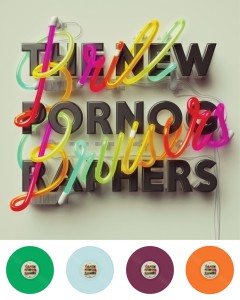 I’ve been a fan for a number of years, but I will admit to not having as much faith in the New Pornographers for a couple records now. So believe me, when Brill Bruisers first started spinning on my turntable, I was ecstatic. There is nothing hit or miss about this album in both the music and presentation. It all out RAWKS!

For lack of better explanation and categorization, I’d call this the best power-pop record I’ve heard by the band yet. The promise of their first three records comes to total fruition with a glorious record that doesn’t lean on any one sound for very long.

In the past it often seemed like some songs would come off as weighing a little too heavily on the sound of one instrument to drive their song while others stayed in the background. It would only be certain songs where the mix encouraged everyone to put it all out at once (think “Mass Romantic”).  Brill Bruisers doesn’t do this. It is playful and gives everyone their due.

Think of this record like the 1970’s Montreal Canadians during their cup wins. The band is loaded with talent and now they’ve learned how to work beyond one or two people carrying the team at a time. Instead they are just one cohesive unit firing on all cylinders.  It is just that frickin’ brilliant

Now don’t ask me why that is, perhaps being apart on other projects has given them a new found joy when they get together. Or maybe they’re letting some ‘nerdier’ 70’s influence seep into their music (think ELO who they have recently been covering, or the obvious reference to the Brill building itself). Whatever the case, it is working for them.

So by itself the music is outstanding on this record… but it didn’t stop there. Having ordered it in advance direct from their website (actually, the same edition is out in your local record stores, you just don’t get your choice of colour), it arrived at my home in a glorious 12” inch cover depicting multi coloured neon fun. Then I rip into it, and find cool 70’s style 3D glasses, a large poster of the album cover. Put on the glasses and the poster shimmers in glorious “ChromaDepth 3D”. Pull the record out of the sleeve and the vinyl is a translucent light blue and just looks damn fine spinning on my stereo. Add to that the down load card and you get one awesome package.

Brill Bruisers is the very definition of why I like my music on vinyl. It isn’t just the songs that stand out, but the entire experience is expanded to be a visual and tactile art as well. Now if only they could have packed a club sandwich in with this and I would really be jumping up and down with joy.