Originally I was going to do a music memories take on Matthew Sweet and his always fantastic Girlfriend… I still might, but other things have popped up to make this a bit more informational for music fans in general. 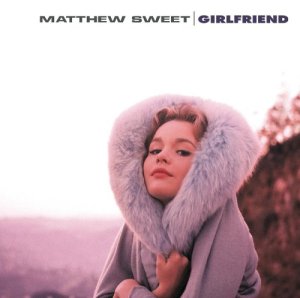 First Girlfriend was released on vinyl back in November with a slightly altered track listing. While the CD version contains 15 songs, the vinyl is cut down to 12 for space reasons. It seems that rather than picking and choosing someone’s ridiculous idea of weaker songs, they just dropped the last three tunes from the original 1991 Zoo release. (“Does She Talk?”, “Holy War” and “Nothing Lasts.”) It’s unfortunate really, it may have been a better idea to split the record onto two vinyl discs and add a couple ‘bonus’ tracks rather than remove anything… but whatcha gonna do.

Now I couldn’t find out if this Plain Recordings vinyl was remastered for vinyl or if it is taken from the CD master, but the sound quality is outstanding regardless. Having it burst from turntable to speakers gave me the same energized feel I got back in ’91 when it blasted out of my Walkman on my way to class.

The next two pieces of info are a little bit ahead of the curve this time so, if you are a fan, this is great news.

Last June, Sweet’s Facebook page announced a Kickstarter campaign to raise funds for a new record. By mid July he had reached his goal and a new record should be showing up around April of this year. It was a pretty good campaign that included rewards such as downloads CD’s coloured vinyl and original artwork by Sweet himself. 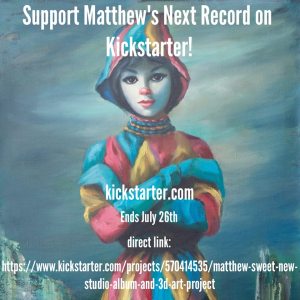 Also, Blue Sky On Mars (1997) has been released on vinyl in Europe (by Music On Vinyl), and has just landed here. Amazon has it on a 3 – 5 week delivery, but one of my favorite retailers, Northern Volume, has it in stock now. It’s on 180 gram audiophile vinyl and has a gatefold cover with insert. 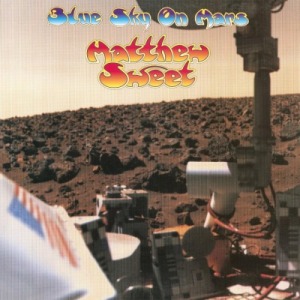 If you are unfamiliar with Blue Sky On Mars, it is the last in a string of four records (Girlfriend, Altered Beast, 100% Fun & BSOM) Sweet put out on Zoo, and remain arguably his most well known. On this record he adds elements of the 70’s Todd Rundgren produced Cars to his usual Big Star inspired power-pop for what I’ll call a bit more of a carnival ride atmosphere. It swings in such a way that during the albums heavier moments it reminds you of the blasting rhythms you hear playing from the classic “Polar Express” ride at the CNE (Canadian National Exhibition). Sure, as always, critics have complained that Sweet’s music comes off a little too ‘syrupy’ to make for a lasting impression, but honestly, I’ve always found those complaints to be a bit short sighted. To my ears, he has always had one foot in the guitar driven tunes of the 70’s while the other is standing in the premier pop of Burt Bacharach and Harry Nillson. If anything, as demonstrated by his cover records with Susanna Hoffs, Sweet has a soft spot for the well produced and hooky in all genres.

Anyway, I’ll likely own the vinyl within the week and I highly encourage you to give it a listen.