Back by popular demand, another round of Dinosaur Jr’s Bug Live @ the 9:30 Club. The Original limited release back in 2012 was in two colours. 800 copies were in were in translucent green and another 200 in purple. They sold out quick. 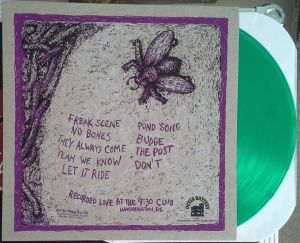 So now it’s 2015 and Outer Battery Records has decided to do a second run. This time the release is both slightly more limited and less at the same time. The more exclusive edition is a white and purple splatter vinyl that will see only 300 made and has to be ordered direct from Outer Battery. The regular edition that will hit record stores on February 10th will be on red vinyl. 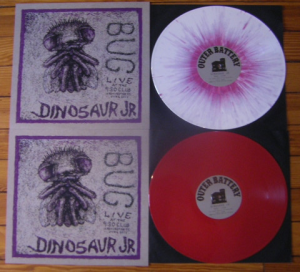 The original green vinyl sounded great on the turntable and it sounds as if the new release is taken from the same masters.

Now as for a review, well, Bug Live is a phenomenal documentation of the Dinosaur Jr. with their best line up. While most fans are more familiar with the bands 90’s output on the major label Sire (Green Mind, Where You Been, Without A Sound, Hand It Over), there most powerful music came from the line up of J. Mascis, Lou Barlow and Murph who appeared together on their first three records (Dinosaur, You’re Living All Over Me and Bug). Apparently, creative tensions between Mascis and Barlow led to the departure of Barlow, and it wasn’t long after that Murph left.

Regardless the three started recording and touring again in 2005 and have released several very well received records since. This album was recorded live in 2011 and captures the band playing a highly energized performance of their 1988 release Bug.

If you are even a passing fan of Dinosaur Jr. then I’d suggest that this is a bit of an opportunity to expand both your listening experience with a great live record and own a pretty damn awesome collectible at the same time.