I had an awesome birthday last year. Small gathering of family, good conversation, and people who know me well enough to pick the most awesome of gifts… it was a great day!

My wife and kids got me this:

How cool is that eh!

It took almost ten hours to build which I did over several sittings and it now has a place where it is prominently displayed so that the world can see just how much of a geek I truly am. For any of you thinking about it, the original price tag is a hefty one, and the re-sale value is through the roof.

First thing to know is that the Lego store still has them priced at $229.99 Canadian. Unfortunately they also have marked it as ‘Hard To Find’ which means that it will soon slip into the Sold Out category.

Resellers on e-bay are already listing new & unopened sets at over $300.00 American. It is crazy, but once the set sells out some people will be willing to pay that price or more. Depending on how you see this (toy vs. collectible) it really isn’t surprising. The show has hit 25 years while still remaining popular, and the Lego set has 2523 pieces and is detailed from the garage right down to the ‘property of Ned Flanders’ barbecue. The original set was sold with six minifigures, while 16 others were sold separately in individual packages. Some kids at my sons birthday parties were getting up close and personal with the minifigures, even reading the little things that characters had in their hands.

In Fact, even the minifigures are going at crazy prices for the complete set of 16. The lowest price I spoted on kijiji was $90.00 while most people were asking well over a hundred. If you like them, but don’t want to pay those prices, a new set of Simpsons minifigs will be going on sale May 1.

Of course that is also the day that Lego releases the Kwik -E- Mart. 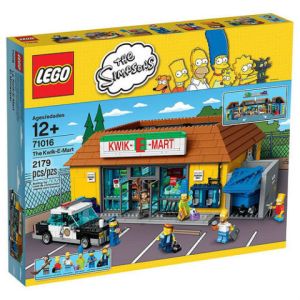 Direct from the Lego store it is also priced at $229.99, has 2179 pieces and includes minifigures of Homer, Marge, Bart, Apu, Chief Wiggum and Snake. It looks very cool.

Now, how many days until July?