It’s funny the tricks that your mind creates for some screwed up database of how you remember things. As I drive on the 401 there is a man-made lake that you can see as you drive by the Niagara Escarpment, I think it is named Lake Kelso. Hundreds of times I driven by this spot in all seasons, weather, and times of day and every time I smile. The opening chords to “Sister Havana” play in my head and I picture an old Volvo with a tape deck that has wires hanging out, stretching toward a CD player that rests on a pillow on the floor. My roommate Kevin is hyped by this band and is telling me the finer details of their former indie label existence. I’m enjoying the song and nodding a lot as I look through the CD booklet. One song becomes another and by the time we hit downtown Toronto and the final notes of “Heaven 90210” ring out, I’m a fan. I know that when I get home I’ll be picking up this record and telling everyone who will listen, Saturation is a GREAT ALBUM! 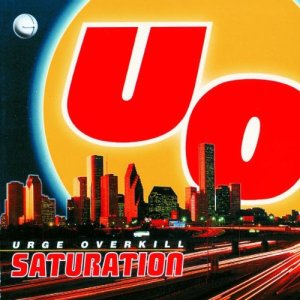 Later that night as Urge Overkill took the stage things were a little different than usual. It being 1993, most bands were dressed down in ripped jeans and whatever t-shirt was handy at the moment. These guys were in flashy suits with big gold chains that had carried the UO medallion around their necks. As the show kicked in, the maybe 400 people present were treated to a freakin’ rock spectacle of epic proportion. For the next couple hours this band was convincing this audience that they, Urge Overkill – Nash Kato, Edward (King) Roeser and Blackie Onassis  were the greatest rock ‘n’ roll band on the planet. They swaggered, they posed, and they had a great album that was being performed in glorious fashion. Walking out of Lee’s after the show I was a ‘HUGE FAN’ and absolutely convinced they would be massive.

Critics loved them, other rock stars couldn’t heap enough praise on them, and they were in every alternative magazine of the time being ‘rock stars’. But that was pretty much the height of it all. They just didn’t catch on. The next album, Exit The Dragon, didn’t capture audiences imagination the way Saturation had and they broke up.

So here it is more than twenty years later, and I want to honour that day, that time, when for a couple hours Urge Overkill was the world’s greatest band. So I want this:

Problem is the price and the condition. A good clean copy with a mint cover is around $100 once you add shipping. Oh well, maybe Geffen will do a re-release on vinyl… that would be cool! Still I want this album in my collection. I want this beautiful piece of orange vinyl playing at 33rpm as it takes me back to memories of Lake Kelso and Lee’s Palace.

One thought on “For A Couple Hours They Were The World’s Greatest Band! Urge Overkill – Saturation”