Cool re-issue from Japan. Not very expensive if you can find it

Ziggy invades America, less a space alien and more a genuine rock star. While it is easy for most of us to see the classic The Rise and Fall of Ziggy Stardust and the Spiders From Mars as the peak of a string of amazing records, it was Aladdin Sane that solidified his rock god status and was the real beginning to his conquest of the States. 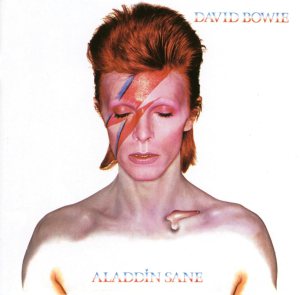 So now it has been 42 years since its release, and I’m searching through the various vinyl editions that can be had, when I come across these pieces of magical wax.

Here I was thinking that a 180 gram re-master would be the best thing I can get, but… what the hell is the story with this little gem.