Funny how some albums by the world’s biggest artists just don’t get given the respect they are entitled; or funny that some records can find reverence in one place and not another. Then there are those that are outright discarded or left out of the conversation because they don’t fit the mystique and narrative created by the artist themselves. Pin Ups is just such a record on all those levels. It was merely considered adequate by critics, and casual fans of Ziggy and Aladdin just seemed confused. It charted on three different occasions in the UK, but did little (by Bowie standards) in North America. Bowie’s  grand design to record two covers albums with songs from first the U.K. (Pin Ups) and then the U.S.(Bowie-ing Out) fizzled and the second record never materialized.

This might explain why as a teen I had avoided the record. Sure, I was a Bowie fan but I didn’t have cash for something I wasn’t going to really like. However, during a visit to my trusted used record store I picked up a copy, and found out that – I really do like this record. Like Green Eggs and Ham, I guess I should have tried it.

Now I find myself wondering if I can get my hands on a “collectible version.” The copy I purchased came from a batch of regular black vinyl that was released in unison with that new technology, the compact disc back in 1984. But… it wasn’t the only vinyl Bowie released that year. A series of limited edition and numbered picture discs also came out. The series included Hunky Dory, Ziggy Stardust, Aladdin Sane, Pin Ups and Diamond Dogs. Amazingly, you can get mint copies of it still for about $60 American and used copies around $40. (However, Ziggy has asking prices over $250 in case you started thinking about it.)

The next remaster did not occur until 1990 and things got a little complicated at this point. Pin Ups was released worldwide by EMI, but in North America RYKO got hold of the remaster job, and they did things a little differently. Rather than the black vinyl with gatefold cover as EMI had done, RYCO released a limited edition numbered copy in clear vinyl. For comparison sake, you can get the EMI version for about $30 but the RYCO vinyl will set you back about $100 plus shipping on the reseller market. 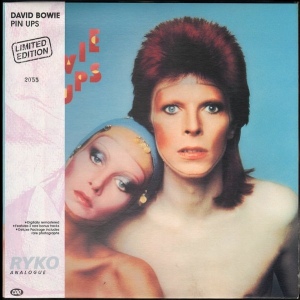 Of course, any crate digger out there will tell you they can get an original in decent shape for a fraction of all those prices… so, give it a listen on whatever handy device you have. Then you can decide on a budget, because if you’re anything like me, you’ll want a copy.