Posthumous releases hold a strange place in the collective consciousness of the music masses. In most cases we see established artists whose lives have been cut short having albums put out by record companies mining demos for a last nugget of gold. Other times, records were near completion when tragedy struck and band members finish recording as a memorial. Chris Bell didn’t fit either of these bills.

The failure of Big Star’s #1 Record to get recognition beyond critics and music insiders meant that Bell never received or understood the extent of his talent and eventual influence. Disillusioned he left Big Star and from time to time he recorded out of differing studios hoping to release something that might connect and ultimately gain a modest amount of respect and adulation. Of course, it never happened. Other than the limited 1978 7” for “I Am The Cosmos” and “You and Your Sister” nothing was released before a car accident took his life on December 27th 1978.

So it was that others were left with the task of compiling a record together to at once honour, shine a light and in many respects introduce the brilliance of a young and gifted solo artist. In 1992, the first Ryko edition of I Am The Cosmos arrived on record store shelves in only the CD format. Cassettes were sent out as promos to various media outlets and for quite a while, that was it. Mean while, the first wave of the Big Star revival was taking place and interest in the late artist was increasing with a bunch (Posies, Jayhawks, This Mortal Coil…) of recording artists doing cover versions of the title track.

With more knowledge of both Big Star and Bell, many people have wanted to get their hands on a definitive copy of I Am The Cosmos. The problem with that is there isn’t much more to expand upon beyond the quality of the initial release.

So here are the options: 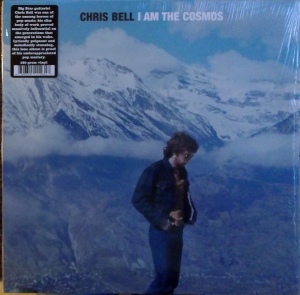 In 2014 Rhino released a two CD remaster with companion disc containing alternate versions of some songs as well as three songs from Bell’s pre-Big Star days. (Some copies went out with a bonus 7” reproduction of the original “Cosmos” single)

Going through the various forums sound quality on all versions has come into question amongst the audiophile community. It isn’t that the criticisms aren’t valid, but certain facts need to be pointed out. Bell didn’t record a completed album, and had bounced between several studios in producing all the material that went into it. While I’m certainly no authority on recording studios in 1970’s Memphis, I can hypothesize that not all are equal. Different equipment and atmosphere from place to place means that things can be disjointed in terms of overall sonics.

That said, the songs are incredible and they rise above such criticism by the sheer beauty of the captured moment. Having both the Ryko and Rhino editions I can hear slight variance, but the music captures me in such a way that I quickly forget about any such thoughts. Honestly, I fully intend on purchasing the vinyl as well; trusting that the recording process was done with the same reverence as I carry for this record.

It’s a gorgeous record with some great songs and one I even hold amongst the greatest all-time. Give it a listen.