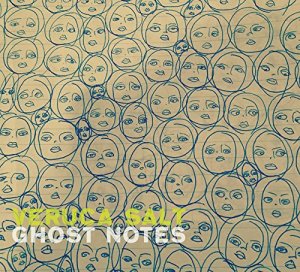 How exactly the musical time cycle works (you know, that comic book like mystical place that makes old things new again) is beyond me, but I’m pretty damn appreciative of it at times.  Such is the case with Veruca Salt and the ‘new/old original line up’ who sound like they just picked up from a few weeks off rather than the 18 years between albums proper. As they put it themselves on Facebook: “hatchets buried, axes exhumed.”

Ghost Notes begins with the self proclamation anthem “The Gospel According To Saint Me” which promises “it’s gonna get loud” in a bold RAWK star posture. They may very well sing it in those pretty harmonies, but there is no mistaking that ‘us against the world’ stance that is willing to blast you away with amplification. The second track “Black and Blonde” starts to chug through the opening chords and that “us” impression is completely verified as Louise Post has her ‘drop the mic’ moment cracking “I’m the greatest fucking thing that ever happened to you.”

Even the reminiscences of “Empty Bottle” fit the ‘don’t screw with us ‘narrative’ as Post belts “count the stars and we can bring them down.” The song may be a promise of loyalty but the lyrical imagery of gushing blood and universal destruction exude power immeasurable.

Perhaps that is the point and perhaps not, but Veruca Salt are now playing music with the confidence of a Stan Lee superhero. Picture it, Super Heroine “Seether” emerges from the flames with a guitar in her arms. Having beaten the ghosts of years past she emerges the conquering hero.

Now, grab the popcorn sit back and give it a listen.

Ghost Notes comes out on July 10th and is currently streaming on NPR.