I’m willing to bet you didn’t realize that Peter Parker, you know – Spider-Man, is an Elvis Costello fan. Seriously, way back in 1981 the Purple Man, who has hypnotic abilities, told Spider-Man to climb up a lamp post and recite Shakespeare. Unable to recall any, he asks permission to sing a song and breaks into the Elvis Costello classic “Oliver’s Army.” Honestly… it took place in Marvel Team-Up Annual #4. Here’s another little bit of geek trivia for ya (whether you want it or not), that issue was written by Frank Miller; one of the biggest names in the comic business. 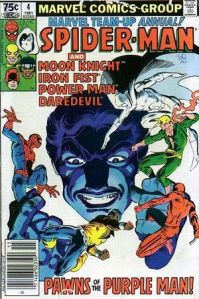 Anyway, Armed Forces was adored by critics, fans, and Peter Parker. It has also appeared on lists as being one of the greatest all time albums. With those accolades you would expect that Armed Forces would have given the deluxe style treatment… and it has, sort of, but not to extent that perhaps it deserves.

The original 1979 UK release came with a bonus 7” named Live From Hollywood High which contained “Accidents Will Happen”, “Allison” and “Watching The Detectives.” Plenty are available on the resale market, but finding a copy that has both the bonus postcards and the 7” in good condition is a bit more difficult.

In North America, the same offer was given, but the cover art and song order were different. “Sunday’s Best” was replaced with a cover of the Nick Lowe penned “(What’s so Funny ‘Bout) Peace, Love and Understanding.” Interestingly, it is the Costello version that became most famous and has appeared in the Rolling Stone greatest songs of all time list.

It wouldn’t be until 1993 that the Armed Forces got a significant upgrade in the CD format. Rykodisc in the US did a complete remaster of the Elvis Costello catalogue and released it with bonus material. In this case, the original UK cover was restored and both “Sunday’s Best” and “(What’s So Funny ‘Bout) Peace, Love and Understanding” were included. The bonus material included the Live From Hollywood High EP plus a few extra tunes.

In 2002, Rhino and Edsel released another remastered Armed Forces on two CD’s. This version brought back differing covers for North America and Europe as well as separating the album proper from the bonus material. The extras also expanded the Live From Hollywood High material to include 9 songs from that event.

Finally, 2010 saw Mobile Fidelity Sound Lab do a half speed 180 gram vinyl remaster with the original UK cover and the full 13 songs including “(What’s So Funny ‘Bout) Peace, Love and Understanding.” I’m hoping that by 2019, we may get both the album and the complete Live From Hollywood High concert on vinyl… but that is wishful thinking. 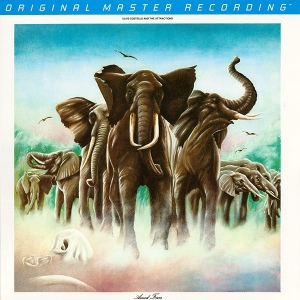 I wonder if Peter Parker still has his original copy on vinyl and if Aunt May ever became a fan.

2 thoughts on “What’s So Funny ‘Bout Peace, Love and Spider-Man Up A Lamp Post? or Elvis Costello and the Attractions – Armed Forces”