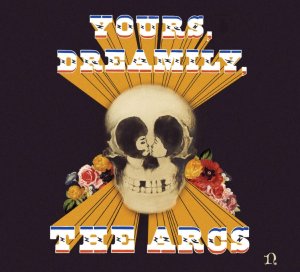 It’s interesting that two guys who appear to hate each other as much as Jack White and Dan Auerbach should have careers that seem to parallel each other so closely. For whatever reason, they both have tried stepping outside the bands they are known for to create something new and different. However, White wisely chose to bring in other vocalists and songwriters (Brendan Benson with the Raconteurs and Allison Mosshart with Dead Weather) to help change the direction of his sound. The result is a distinct difference between each band.

Auebach hasn’t chosen this route. While the writing credits have been distributed throughout the band, The Arcs debut Yours, Dreamily may as well be a new Black Keys record. His guitar – vocal combo doesn’t explore any new territory that differentiates one band from another.

Of course, that doesn’t mean this is a bad record, on the contrary, it does exactly what you might expect from Auerbach by giving you a collection of songs that work his strengths. You have that blues/soul influence played with his vintage Supro and a couple songs that work as ‘rockin’ singles.’ “Outta My Mind” is a familiar anchor song that serves as a statement of arrival, a wave if you wish, that pushes the album towards the deeper cuts. Auerbach laments “working just to beat the clock / all I need is one more shot” on “The Arc” and while his voice seems rather sleepy in the sentiment, the guitar work is ferocious giving the song an image of someone rising up after a beating down.

The problem with Yours, Dreamily is that familiarity with the Black Keys library has begun to breed the perception of complacency with new band the Arcs. There isn’t anything new to offer, but still, if Auerbach is only going through the motions, he does it far better than most.

2 thoughts on “Going Through The Motions? or The Arcs – Yours, Dreamily”