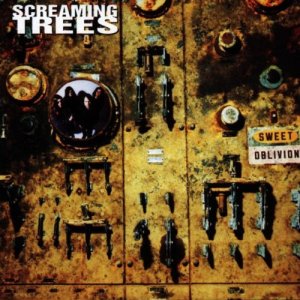 It had been years since I last played a Screaming Trees record. Once a staple that sat by the CD player and saw pretty regular rotations in the carousel, it had moved to a secondary location for music seldom played. New music, new bands, new sounds had found their way into my imagination and I moved on. Then the other day I saw a post for an advance order of Sweet Oblivion on vinyl and my mind flashed back – “damn, it’s been too long” as I started to type my order.

A few weeks later the gold coloured vinyl is spinning on my turntable and it feels like an old friend has returned from a long trip away. The conversation flows easy as if no time has passed at all, and I’m at ease just listening when I hear the old familiar stories. Not epic like Soundgarden or angry like Nirvana, Screaming Trees were a pretty straight forward gritty rock band with a penchant for great song writing and one of the best vocalists of the era in Mark Lanegan. Unfortunately, like many of the great 90’s rock bands, they didn’t stay together past the turn of the century, and faded from view.

Anyway, for vinyl junkies you have three choices to spin Sweet Oblivion. The original ’92 release had a limited vinyl printing that came with the CD booklet and a sticker on the shrink wrap declaring it the “One Foot In The Grave” version. If you can find it, it will set you back a minimum of $50.00 plus shipping.

In 2010, Music On Vinyl released a 180 gram version that had fans giving compliments for quality. You can still find it most anywhere.

Finally, Newbury Comics released a limited 1000 copies on 180 gram translucent gold vinyl. In addition to the foil stamped numbering on the cover it included new liner notes written by Screaming Trees drummer Barrett Martin. They still have copies, so don’t go crazy ordering from resale sights asking for a $100. 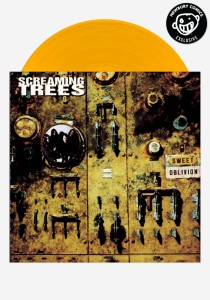 Overshadowed or overlooked, I’m not sure which, but Screaming Trees should have been bigger than they got. Regardless, Sweet Oblivion is sure appreciated and is once again sitting in a spot close to the stereo.